I won't bore you w/ details but in a nutshell I was harassed and fired from a job, then applied to 100+ jobs but got rejected by all (women over age of 35 don't get hired in Japan). I went on welfare to survive, and wrote about the whole incident in a book "Shisshoku Joshi ("Jobless Woman-- My Journey of Getting Fired to Recieving Welfare)" below,  which was published in 2014.

The book is available on U.S. Amazon from the link below! 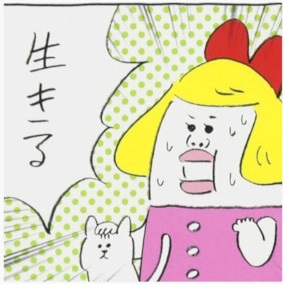 Since then my health deteriorated, I have a bunch of conditions including Endometriosis and depression.

Last year I finally decided to get hysterectomy (the only effective treatment for Endometriosis) because by then I was bedridden, like 20hrs, everyday.

I was merely existing, not living.

However I had such a hard time finding a hospital to perform hysterectomy on me, mainly cuz I'm an unmarried woman w/ no child (the doctors were like "You'll regret this, how can you not want a child!")

I've been writing about the Endometriosis journey as a serialised column online.

The theme of the Endometriosis series is

"If a woman loses her uterus, is she not a woman anymore?"
"How is sex life before-after hysterectomy?"
"What defines femininity?"
"How can a woman realize her ideal sex life (expecially in Japan where it is so taboo for women to talk about sex)"

As you might have guessed, in Japan, a woman without a uterus isn't considered a woman and is expected have no sex life anymore.

But I don't believe so!

Now the series is finished and my editor and I are having a hard time getting it published, because the theme is... too "controversial" I guess?

So we decided to self publish and collect printing fees by crowd funding!

You Recieve a CUTE Pin Badge in Return!

For contribution of 1000yen or more, I will send you a cute little pin badge (designed by me...I'll do my best to make it sooooooo cute you can't resist)!

(If you have a Japanese banking account,  to contribute--just go to this blog entry ↓

Our Mission for Self-Publishing this Book

My wonderful editor wrote a great text explaining this event, I translated it so I can share it with y'all! :

Please HELP! A jobless woman wants to sell her book at the self-publishing sales event!

In the deadly Japanese summer heat, Aya Yamato, a jobless woman, was struck with an idea--
"I want to sell my self-published book at the 27th Literature Free Market https://bunfree.net/ , held on Nov.25, 2018!"

No, she hasn't gone mad because of the heat wave.

Yamato has never self-published a book or sold it at an event, which is quite scary. But even then, she has a message she wants to send through her book.

Hello, we are "Gorilla Bunnies" a project team to self publish Aya Yamato's second book.

In 2014, Yamato published a book "Jobless Woman-- My Journey of Getting Fired to Recieving Welfare" from WAVE Publishing, Inc.

The content of the book is exactly as explained in the title. Since then, Yamato has been living with her mental and physical condition.

The next subject Yamato decided to write about was about an end of a phase in one of her long-time illness, and also about a mission she decided to take on at that time.

▼You're not a woman without a Uterus? That's crazy!▼

The condition which Yamato has been battling for a long time is Endometriosis. It is a common condition, but symptoms vary for every woman. Yamato's condition was quite severe.

In 2017, doctors agreed to perform her hysterectomy, a procedure to take out the uterus.

It was good news considering her health condition, but Yamato had concerns, too.

In Japan there are myths surrounding this particular organ.
"You are not a woman anymore if you lose your uterus"
"Your sex life changes for the worse after hysterectomy"

Terrible myths, untrue, of course (but a lot of Japanese believe it).

Yamato couldn't help the impulse to "prove with my body that these rumors are untrue!"

However at that point, Yamato hadn't had sex in 10 years. How's she ever gonna prove anything, being sexless?

That was the start of the project "Does the existence of uterus change how a woman feels?"

Dating applications and mature social gatherings. Yamato, with her surgery only weeks away, meets men whom she had never come across in her life.

▼Mission Statement: To have Aya Yamato's journey read by as many people as possible▼

To begin with, we will participate in the Literature Flea Market in November (we've already applied and paid to participate).

The reason Yamato began the column was to let women, who hesitate on getting hysterectomy, know the truth. Many women in Japan believe that without a uterus "I won't be a woman anymore" and that "my sexlife will change for the worse."  Yamato wants them to know that is only a myth and they don't need to worry about that when getting hysterectomy.

By making this into a book, we hope that even more people can share the truth.

That being said, we are broke.

It is costly to print a book. Yamato is a "Jobless" woman. It is very difficult for her to come up with printing fees.

Therefore we decided to ask for contributions to create this book. Main use of the money will be as follows:

Thank you for reading this to the end.

This book includes many important themes such as below.
"What makes woman a woman?"
"How can a woman realize her ideal sexual life?"
"What is a uterus for woman?"

Our wish is for more woman and men plus people of all sexualities, to be able read this book, compared to while it was serialized on web.
In order to do so, we sincerely need you contribution.
Thank you for your help, in advance!

*Even if you could just spread the word, we will be deeply grateful!

Thanks again, we look forward to hearing from you!
(written by Yue Miura)

Thank you so much for reading this loooong post! Hope you all are doing well!